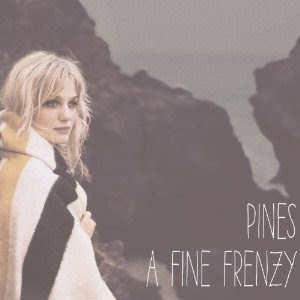 
Alison Sudol (AKA A Fine Frenzy) has moved in a whole new direction from her past records, which were stellar recordings in their own right. Her newest- Pines, is a concept album including an illustrated book to go along with the music. The first single "Now is the start" is a perfect pop song to release, but does not represent the overall character of the record. It is mostly filled with acoustic guitar oriented songs that seem to be connected like some kind of soft-rock opera, and showcase her highly impressive vocal skills. It's the smart move, and more importantly a very innovative direction to go in. We've seen similar records within the progressive rock genre, and some can argue that this IS progressive music, even if on the softer side. No one can argue Sudol's musical expertise, and those that aren't aware of this artist will discover just that from this record. Pines has various movements, from experimental art-pop to landscape soundtrack music. I assume there is the influence of classical music in this, as the album is sequenced much like a classical piece with unexpected twists and turns, but still, everything feels connected. It will take multiple listens to 'get it', but believe me, it's well worth the time to explore.
Posted by Muddy at 12:00 AM