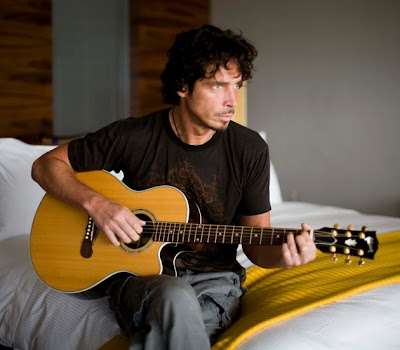 Chris Cornell will tour again in the Fall, playing a series of intimate 'Songbook' shows highlighting songs from throughout his career.

For most shows, the public sale will begin on Friday, August 16 at 10am local time.

Madison, Vancouver, Calgary, Saskatoon and Winnipeg go on public sale August 23 at 10am, with fan presales for the Canadian shows running from August 21 at 10am to August 22 at 10pm. Password: Seasons (not case sensitive). Please note: the link on the website where the Fan Club presale access code is to be entered will not register the code until the presale opens.

This year also marks the launch of The Chris and Vicky Cornell Foundation, which gives aid to the most vulnerable children. One dollar of every ticket sold on the tour will be donated to the Foundation, and a portion of the proceeds will benefit ChildHaven’s Creative Music Therapy Program Expansion. Visit http://www.childhaven.org/ for more information on ChildHaven and the program.
Posted by Muddy at 12:00 AM