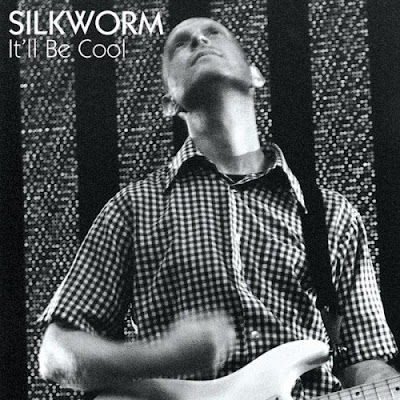 Also, until October 21st (2015), we are offering a pre-order only bundle comprised of a limited edition Silkworm record tote together with your choice of a white or black vinyl copy of It'll Be Cool. The record totes are natural cotton with a silkscreened RED Silkworm logo. Pre-order the tote+LP bundle HERE

Be sure to order before October 21st as we are not printing any extras!

Bullheaded, crossbeam-chomping persistence: fourteen years, nine full lengths, many singles and EP's, innumerable tours, wild fluctuations in the public appetite for their work. That's not to demand that Silkworm be called forward for some sort of alt-culture valor award-- their concentrated, seemingly effortless forces arises from dogged pursuit of certain values that most current bands either don't care about or fudge in the studio environment, namely: tightness, heaviness, instrumental command.

Silkworm do care, and don't/won't fudge.
Posted by Muddy at 8:52 AM

Email ThisBlogThis!Share to TwitterShare to FacebookShare to Pinterest
Labels: Silkworm's "It'll Be Cool" Makes Its Vinyl Debut on Touch and Go Records!