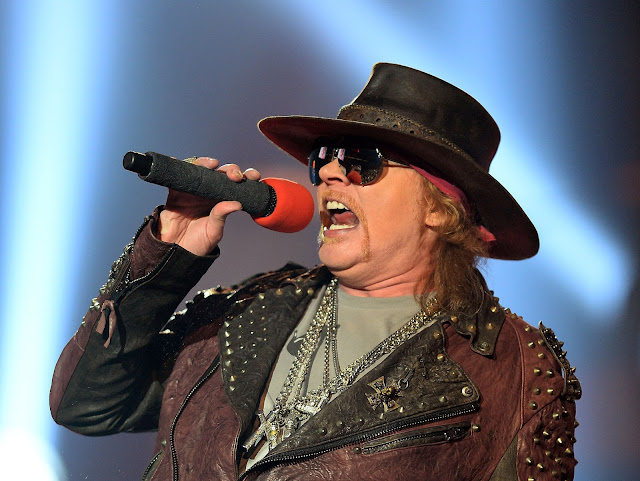 Speculation reached a fever pitch last week that GUNS N' ROSES was close to announcing a reunion tour, but now a report has emerged indicating that the band lineup for the trek may not be exactly what fans had in mind. According to The Pulse Of Radio, the tour will feature founding members Axl Rose on vocals, Slash on lead guitar and Duff McKagan on bass — but that's all for the original roster.

Instead of also seeing original guitarist Izzy Stradlin and drummer Steven Adler — or even "Use Your Illusion"-era drummer Matt Sorum — fans may instead get current guitarist Richard Fortus and drummer Frank Ferrer joining the big three, as well as longtime keyboard player Dizzy Reed.

A report from Dish Nation claimed last week that a reunion tour was "close to being revealed," with the band allegedly headlining several major festivals in Europe and the U.S. before embarking on a worldwide tour to mark its 30th anniversary.

Rumors about a reunion have been heating up ever since the summer, when Slash revealed that he and Rose had repaired their relationship after nearly 20 years of estrangement.

Several members have recently left the current lineup of GUNS N' ROSES, which features Rose as the sole original member. The band has not performed live since last year, but its Twitter account has posted several cryptic messages lately, furthering talk of a reunion.

Other celebrities and musicians with direct or indirect ties to the GUNS camp have also hinted that an announcement is imminent.
Posted by Muddy at 12:00 AM