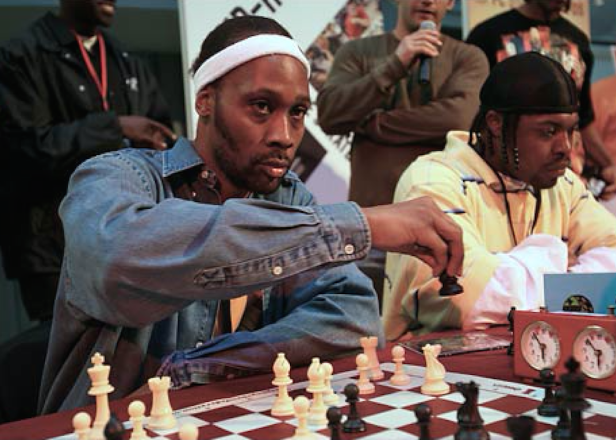 From “Da Mystery of Chessboxin‘” to that 2012 Liquid Swords special edition chess set bundle, it’s not hard to figure out that RZA has an affinity for knights, rooks and bishops. The Wu-Tang Clan admiral has been playing chess, sometimes quite competitively, for many years, and now he’s found a way to use the check-boarded game as a means of giving back. Earlier this week, RZA made a sizable donation to the Hip-Hop Chess Federation (HHCF), one which allowed it to establish a program that will help teach the game to juvenile hall inmates. The MC is also serving as a board member for the non-profit, which will work to bring “Chess and Life Strategies” to The Lou’s at-risk youth.

Speaking in early October to more than 400 high school students across the St. Louis area–many of whom reside in Ferguson–RZA took time out to play chess with some of the area’s incarcerated youth before making a donation directly to HHCF founder Adisa Banjoko. ““That night RZA handed me a check and asked me to put together a program to help the youth of St. Louis.” Banjoko said in a press release. “I promised him I would make it happen.”

“Y’all are in here for not controlling your energy, yo,” RZA told told those gathered at the juvenile hall. “You are here now for not being analytical about the results of the actions you have taken. I’m the last one to talk in some sense. I’ve been through the same system…Me and my brother got our first gun, when I was 11 or 12…Riding NY city busses looking for what they call, a ’vic.’” Stressing that immersing himself in literature and chess offered a route to self-reflection and better decision-making, the MC expounded on the benefits of practicing the centuries-old strategy game:

“It’s a game of chess in one sense, but in another it’s a study of life. We in the Hip-Hop Chess Federation are striving to bring awareness to American’s, to Black youth, but to the whole of American youth… That chess study, along with martial arts, along with music- is the best way to help develop your mind and body and protect you from pitfalls in life that will surely come at you.”
Posted by Muddy at 12:30 AM