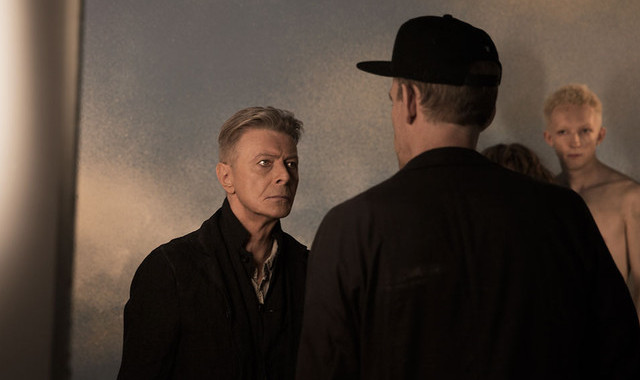 When David Bowie returned from exile with 2013’s ‘The Next Day’, an album that wistfully referenced his late-‘70s art-rock heyday, it felt like this eternal futurist was starting to look back. Wrong, earthlings! Released on his 69th birthday, 25th album ‘Blackstar’ spins the spaceship back around and points it at the moon. Bowie’s formidable record of reinventing himself with each new album remains intact.

His first unexpected move was to jettison the band of long-serving musicians who backed him on ‘The Next Day’ in favour of a group of New York jazzbos led by versatile sax player Donny McCaslin. That doesn’t mean ‘Blackstar’ is a jazz album, it just broadens the canvas. Warped showtunes, skronking industrial rock, soulful balladeering, airy folk-pop, even hip-hop – it all has a place on this busy, bewildering and occasionally beautiful record.

Lead single ‘Blackstar’, with its doomy elegance, multiple narrators and whiff of the occult, gives you a reasonable idea of what to expect – ie, the unexpected. 2014 oddity ‘Sue (Or In A Season Of Crime)’ reappears in radically reworked form, its big band melodrama now welded to a frantic, drum’n’bassy rhythm, its cacophonous climax reflecting the lyric’s murderous intent. ‘Lazarus’ is sung from the perspective of Newton, the homesick alien Bowie played in 1976 film ‘The Man Who Fell To Earth’, and who is also the subject of his new musical. Over a thick, skulking groove resembling latter-day Massive Attack, he inhabits the woes of a man out of time, scarred and self-mutilated.

But the most startling thing here is ‘Girl Loves Me’, a menacing, militaristic tattoo that that finds Bowie rapping “Where the fuck did Monday go?” in a lazily aggressive, sing-song style. Producer Tony Visconti has cited Kendrick Lamar’s ‘To Pimp A Butterfly’ as an influence on ‘Blackstar’, but is it possible that Bowie’s been listening to Young Thug and Future too?

As we speak, Bowieologists are furiously trying to crack ‘Blackstar’’s code. What could an album that references Norse history, Jacobean drama and Atlanta trap possibly all mean? Tellingly, its final song is a serene, lilting number called ‘I Can’t Give Everything Away’. In other words, even if there is an overarching concept – and it’s hard to see how there could be, given the number of disparate elements in play – then Bowie’s not going to tell you what it is. Because where’s the fun in that?

Is ‘Blackstar’ vintage Bowie? No, but nor is that the intention. Actually, one of the few certainties we can take from this restless, relentlessly intriguing album is that David Bowie is positively allergic to the idea of heritage rock.
Posted by Muddy at 12:00 AM