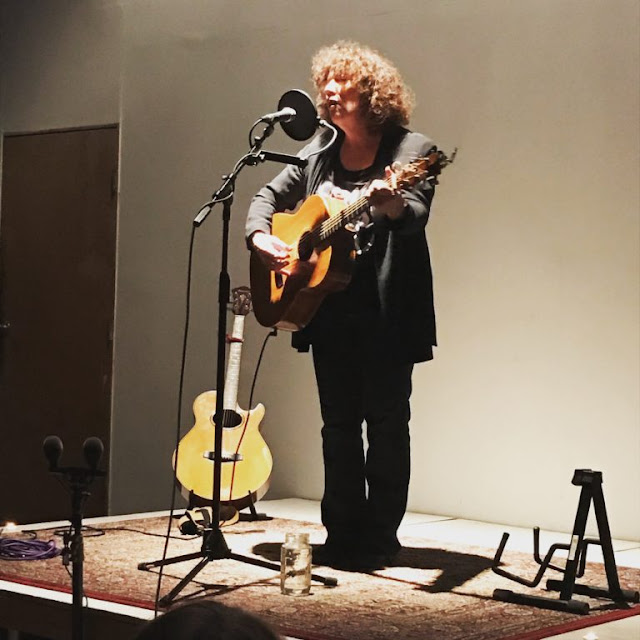 It was a rare treat when Avant Ghetto Presents brought the British folk legend Bridget St. John to Brooklyn, regaling a crowd of dedicated onlookers with tales from the center of the folk revolution and a compliment of her and others’ finest work. In today’s America, St. John may not be quite the household name of some of her best-known British folk peers, having largely withdrawn from the music scene after her fourth album, 1974’s Jumble Queen. But, for real aficionados of the modern folk tradition — this show’s sponsor among them — St. John is a leading figure.

This crowd, at the Schoolhouse in Brooklyn, treated St. John with the reverence she deserved. The space may not have been an actual Greenwich Village club circa 1970, of course, but the space and vibe felt like its obvious heir, a group of people bound by something more than inhabiting the same room, searching for the same enlightenment. As St. John covered songs from musical fellow-travelers of hers like John Martyn and Michael Chapman — with both of whom she has recorded — she transported us to a time that birthed a generation, one that feels increasingly distant. As she introduced “Just Like A Woman,” she said “it’s taken me a long time to find my space” in the work, but now, she has. The choice felt especially significant, pre-election, at a time when the role of women has been so much-discussed. Listening to it again now, its resonance is changed, perhaps more powerful.

Of her major period albums, St. John focused especially on her first and third, 1969’s Ask Me No Questions and 1972’s Thank You For in the setlist, but we also heard several numbers, like “Castaway,” “Mon Gala Papillons,” and “The Hole In Your Heart” that she recorded in connection with a tour of Japan in 2010. Seven years after that, and the re-release of her first three albums, we hope that St. John’s contributions will continue to receive the greater attention they deserve.

I recorded this set with a soundboard feed together with Schoeps MK4V microphones at the stage lip. The sound quality is excellent. Enjoy!

Thanks to Jeff Conklin of Avant Ghetto Presents for sponsoring and inviting us to the show. Check out Jeff’s WFMU radio show here.