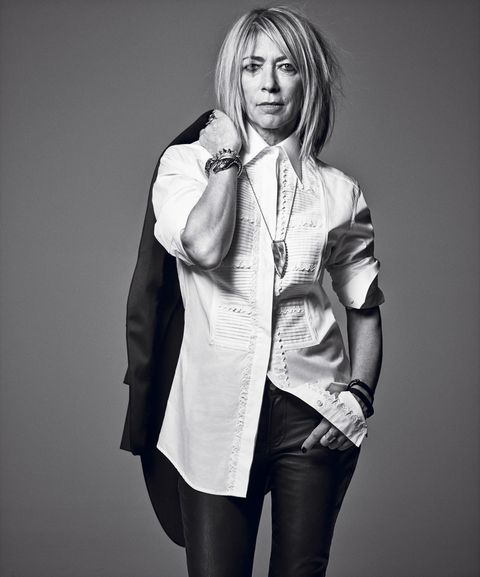 Kim Gordon isn’t typically a list maker. “It’s sort of the thing I hate but once I start getting into it, it’s like, ‘Oh, yeah, this is fun,'” she says with a laugh. “I started out with the theme of classic breakup songs, but then it kind of morphed into the general relationship songs.”

Mostly, she came up with the theme because she thought it would be easy. “I listen to a lot of melancholy music,” she says, laughing. But it could have gone another way. “I was actually thinking of picking songs that dealt with different kinds of breaks, like a break with culture. I was gonna pick Bikini Kill’s ‘Suck My Left One,’ which is kind of a breakup with the hardcore scene and the patriarchy [laughs]. Or Buffalo Springfield’s ‘Out of My Mind,’ which is about feeling a separation from a community. Like [the fans are saying] ,’I’m breaking up with you because you’ve become a rock star.’ It’s about realizing, to use Sixties slang, that you’re becoming part of ‘The Man’ instead of being part of the revolution or the counterculture.”

Instead the Body/Head frontwoman, whose new album The Switch is out now, decided on songs by five women who perfectly articulated breaking up in their own unique ways.

The whole album, Last Summer, has such a great Seventies radio sound in the production. I love her wordplay. She can make something really mundane sound really meaningful [laughs]. On “Roosevelt Island,” she sings about riding the train and there’s a line, “And it goes and it goes.” And I think that song is kind of like, “See you on the other side of a breakup.” It sounds actually hopeful as opposed to the first song on the album, “My Mistakes,” which is sort of mourning a relationship. But on “Roosevelt,” she talks about riding a train and you really get a sense of living in New York and being alone. It’s a window into feeling, in a way, optimistic and excited. It’s about how the city can really energize you, even though going to Roosevelt Island is kind of escaping the city [laughs].

Aimee Mann, “Save Me”
She wrote this song for the movie Magnolia. It’s a classic. Not only does she have one of the most beautiful voices, her lyrics are also amazing: “You look like a perfect fit/For a girl in need of a tourniquet,” and then there’s that great chorus, “If you could save me from the ranks of the freaks who suspect they could never love anyone.”

Lucinda Williams, “Steal Your Love”
The album Essence is such a great heartbreak record, and I love the lyrics, “I don’t want your drugs and I don’t want your money/I just want to steal your love.” She’s just really great at how to be so vulnerable but also the song is dark. She’s really great with her vulnerability because it’s just so raw.

PJ Harvey, “Shame”
The albums Uh Huh Her and B Sides, to me, are two of my favorite PJ records. I love “Shame” because she’s so defiant in it: “I don’t need no ball and chain.” I also love the song “Who the Fuck” on Uh Huh Her. It’s kind of like, “You’re an asshole. Get out of here.”

Angel Olsen, “Unfucktheworld”
The whole Burn Your Fire for No Witness album is a great breakup record. I like “Unfucktheworld” and that line, “I am the only one now/You may not be around.” It’s kind of like, “You’ll always be alone in your life in a certain way” [laughs]. You’re born alone, as they say, although you’re actually not born alone because your mom is there [laughs].
Posted by Muddy at 12:18 PM