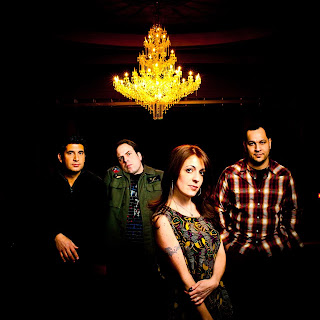 
Long Island, New York natives return with a powerhouse pop EP entitled "Secret Constellation". Iridesense, a quartet made up of singer-songwriter brother/sister duo: Rick and Tara Eberle, along with seasoned blues guitarist Rob Viccari and versatile drummer Rich Drouin are back. Better than ever. They have spent the past few years performing live as well as consistent radio and television appearances. Industry insiders know them for such hits as "Gasoline" and "History in the Making", and they're ironically notorious for being the band that should have come out in the late 80's, thus pushing them into the world wind of indie rock bands that major labels should have signed in a now dying and exhausted music business.

Their newest is a three song EP that's sort of auto-biographical as to their career. It opens with "Voice of Reason", a straight ahead pop song reminiscent of their previous recordings, a reminder of what the band's always been about- Hope, truth, luck and love. It's a song about things that inspire you to keep going and follow your dreams. There are lyrical hints regarding career choices, how they could have reinvented themselves to popular trends but stuck to what they love, the power of a feel good song. "Life" is Iridesense at their most modern, with trippy vocal effects and synth sounds flying in and out, where as their older material was more the band live in a studio. It opens with a short intro that could be considered an homage to themselves, sounding like a continuation of the last, but quickly cuts to a more ambient tone with watery vocals and trickling guitar leads. Hope has never been in song form as well as the lyrics go- "If your heart breaks once, learn from your mistakes. If your heart breaks twice, get back up and say Life isn't easy". All the ingredients of a classic hit song are included, along with a passionate and emotional lead vocal by Tara Eberle. And to polish it off, the signature band harmonies come in on the chorus, provided by her brother Rick. This is the sound of a band that's accomplished so much, they're talking directly to their fans instead of topical ideas aimed at marketing tricks or gimmicky word play. When a band hits this mark, there is nothing more to do but engage the listener with sheer instinct and connect in a more personable way. The following track "Got it Good" begins with the best R.E.M. riff Peter Buck would raise an eyebrow to. It's a thank you to all that have stuck by them and overall, a song of gratitude, counting the ways they are fortunate in life. You can hear the best of their band in this song: catchy melodies, skillful dynamics, beats that make you want to air drum. The chorus is like something out of The Cars catalogue, the quintessential 80's pop band. It works as a bookend to not only the EP, but the beginnings of the band. Things go round and round, and sometimes music is rediscovered years later with a new found appreciation. I think Iridesense have remained true to their desires and wanted to to leave the impression they've spent years carving a niche at. So for a newly revitalized band, this is a remarkable EP filled with genuine sentiment and a lot of heart. If the Clive Davis's of the world aren't hearing this, it would be the result of a fallen genre, not the misdoings of the band. Pop music in general has changed from the 'song' being the most important constituent, to who has the most money to pump their ego on others. If you disagree with me, compare the quality of these songs to anybody on the top 40 charts these days. I think you'll agree.
Posted by Muddy at 2:00 PM