Is there Art in the Art of Anarchy? 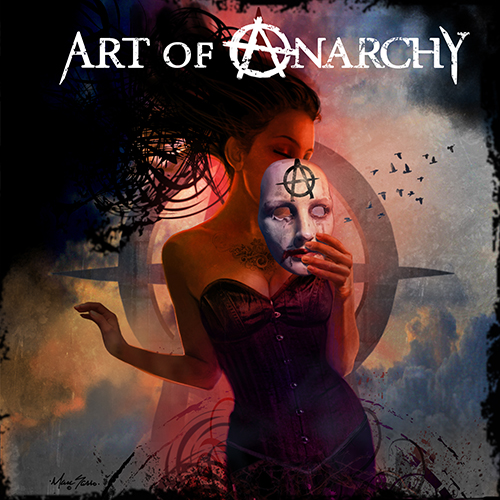 Before I offer my review of this album, I'd like to being with my compliments to the artist who made the album cover.  I love this album cover and I also love the name of this band.

Everything else about this record is terrible. The combination of musicians, the song material, the production... all shameful. This is like a Dream Theatre record gone bad and I think Scott Weiland knew it, but took the money anyway and ran. The drama came out before the music on these guys. Apparently, they hired Weiland to sing and shoot music videos as their frontman. Weiland, in return rejected any connection to the band via interviews after its completion. We all know contracts were signed, but what really happened? Did Weiland think the music would come out better than it did? Did he do it for the money knowing he would distance himself after? Is the band lying about what he signed on to do and not to? Who knows and who really cares about this piece of crap no one will remember in two years. It's very generic metal, barely progressive and without any taste or appeal. It actually sounds like it was made quick and doesn't have any of the qualities Scott Weiland has added to his other previous collaborations such as catchy melodies, interesting lyrics or classic rock vibes. To be honest, they really didn't need to hire Scott Weiland and any typical metal singer could have done a better job. So who is the scammer here? I believe the band used Weiland's name for aspirations of success, even though they claim to be this supergroup consisting of one of ten lame fill-in guitarists from the post-Slash Guns and Roses, and some guy from the band Disturbed. Another terrible band no one will care about in the near the future, nor do I think many cared about them before. There seem to be a lot of these metal groups that buy their way into fame for a minute like Disturbed and quickly forgotten after their ten minutes of fame. How is Art of Anarchy a supergroup!? Bumblefoot is Axl Rose's hired clown that takes second to Buckethead in G n R. I think all of these 'musicians' are taking themselves too seriously. Really, if this was a pack of any other unknown musicians whining about how crappy their contracts are being fulfilled, would ANYONE care? Scott Weiland made the mistake of actually responding to this and helping them get publicity in retrospect. And maybe that was their plan from the beginning. The music is awful and impressively uncreative. It really sounds like a scam. An artless petty attempt at fame using a failing rock star as its only attribute.

I don't blame Scott Weiland for talking shit in public about this project, even if he did sign contracts because it sucks! And he knows it.

A super group? Really!? Bumblefoot and co. need to go back and learn how to write a decent song before this over ambitious joke gets out of the studio. It's shameful what people will do for drama and fame. It makes me feel bad for Weiland, that he needed the money and recorded this. Sad times for an aging grunge star and even sadder for these anonymous never-been backing musicians who 'claim' to be a super group. A little jealous of the Velvet Revolver franchise is more like it. VR was more of a super group and even they admitted to being a money making scheme. They accidentally pulled off a couple of decent records before Scott's departure but this Art of Anarchy is sub par disgraceful bullshit. My advice to all of them is to get day jobs because no one gets the joke and no one is enjoying this crap.
Posted by Muddy at 12:16 PM

Email ThisBlogThis!Share to TwitterShare to FacebookShare to Pinterest
Labels: bumblefoot, CRAP, Is there Art in the Art of Anarchy?, review, Weiland