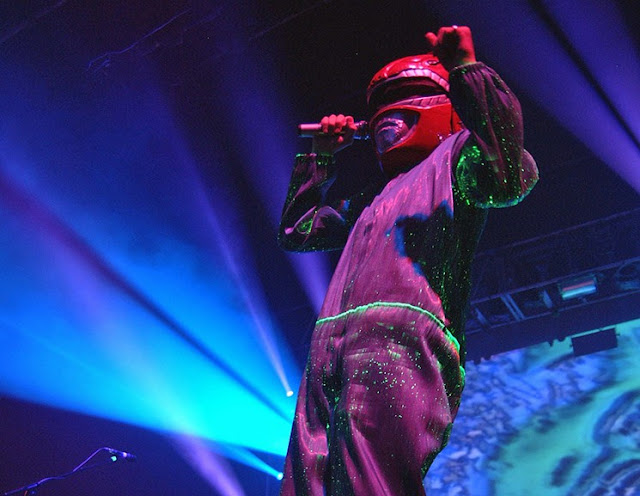 The year 2015 marks, among other things, the twentieth anniversary of the Super Furry Animals' first proper release and debut as a live act. It also represents, at maybe just a bit of a stretch, twenty-five years since their very earliest embryonic stirrings, in Wales, as a band.

But none of those is the milestone they've chosen to commemorate this year. Instead the Super Furries — in characteristic fashion, which is to say lovably askew — have elected to return to the road in honor of Mwng, the stripped-down 2000 outlier on which they sang exclusively in Welsh. (The title is pronounced somewhere between "moong" and "mung.") The album, long out of print, has just been reissued by Domino. The handful of dates behind it, including the Voice's own 4Knots (July 11), are their first outings as a unit since 2009.

So: Why not go with the silver jubilee, as opposed to a mile marker for which there is no handy nomenclature?

"The stars were just in alignment," insists Cian Ciarán ("KEY-an Kieran"), multi-instrumentalist and something of the group factotum. "We didn't plan any of it.

"We didn't plan last year to come back and do a reissue. We spoke to Domino maybe two or three years ago about reissuing, and a guy called Ric Rawlins wrote the biography [Rise of the Super Furry Animals], which came out in February, and then we got offered some shows and it was like those three things all came together around the same time. It wasn't like we put a marker down and decided, 'We're gonna do it.' It kinda made sense. It wasn't contrived. There was no big marketing ploy behind it. It happened to be the fifteen-year — well, every year is an anniversary of some sort, so."

Indeed, contrived seems to be a dirty word in the Super Furry lexicon, emerging as it does more than once in conversation with Ciarán to denote the antithesis, basically, of the group's ethos. Even in matters as trivially prescriptive as band roles — here Ciarán will cop to certain members having certain especial métiers, certain primary functions onstage, but apart from that paints a portrait of Super Furry World as rather a democratic and label-less place. Pressed on the accuracy of early-career depictions of him as the group's secret-weapon electronics guru/sonic architect — or as he puts it, "a synth wizard or some shit" — Ciarán bristles.

Those five members, incidentally, are: Gruff Rhys (lead vocals/guitar, he of the dark fluffy hair and beady eyes), Huw Bunford (guitar/vocals; scraggy, vaguely Scandinavian), Guto Pryce (bass; the most workaday-looking), Dafydd Ieuan (percussion/vocals; hale and hearty), and Ciarán (Dafydd's seven-years-younger baby brother, by the way). They are, alternately, and per Super Furry parlance, each known by a cuddly mononym: Gruff ("Griff"), Bunf, Guto ("Gitto"), Daf ("Dav"), and Cian. Gruff plays left-handed, without restringing, such that the high E is topmost on the guitar. His is the signature baritone, the group's calling-card. But Bunf and Daf sing like frontmen in their own right. None of the five can read music, but they'll leap octaves like the Beach Boys, harmonize like same, change keys on a dime, cram about five separate songs' worth of melodies into three or four minutes, and generally mash up all manner of modes and styles until the end result is unrecognizable as any of the above, until it is wholly their own.

‘We played in Japan, and people in Japan were singing back to us in Welsh.’
That last tendency — or rather, the repudiation of it — has often been cited as the impetus behind the comparatively barebones Mwng. Story goes that the previous album, 1999's Guerrilla — by Cian's own telling, "a lavish experience...weeks and weeks in the studio" — failed to meet pop-chart expectations, possibly on account of a certain kitchen-sink overstuffedness, in response to which the band declared a "pop strike." They then set about writing and rehearsing the all-Welsh array that was to become Mwng, for which Cian avers the recording and mixing process took a grand total of nine to ten days. It was, he says, "an opportunity, almost by default, to take a step back and sort of familiarize yourself again with what you used to do before you had money to go to the studio....We didn't have time to work into the production and all, and I don't think the songs needed it so much, either."

So was Mwng an overt political gesture, an effort to preserve and promulgate Welsh language and culture? A Metal Machine Music–type raging-against-the-music-biz-apparatus? A disavowal of the work that'd come before — the brashness of debut LP Fuzzy Logic, the manic busyness of Guerrilla — signaling a newfound seriousness of purpose?

Only, says Cian, with "the luxury of hindsight." As is the SFA way, Mwng was an organic outgrowth, an intuitive next step. "For us it was just going back to what we were doing ten years before," he says. "Everyone had been in bands previously and had recorded exclusively in Welsh. So it was a natural thing for us. Gruff, I think, hadn't sung in English till he was twenty-six....It might be obvious to others where certain times [are a] turning point, or whatever. Which at the time you don't think about, or it's not obvious."

Even so, the album resonated in ways that Cian, today, clearly finds vindicating. "It opened doors. It allowed us an invite to come to the States to do a two-week tour for the first time. We played in Japan, and people in Japan were singing back to us in Welsh, just singing the phonetics. And people had seen it as a real language, not a dead or a dying language."

So it seems fair to say, whatever the motivation, the album was the needed shot in the arm, the vital bridge to the charming raft of LPs to follow: 2001's pretty-much-undisputed-masterpiece Rings Around the World, 2005's beloved concept work Love Kraft, 2007's song-for-song-great Hey Venus! And maybe, just maybe, it's at least partially responsible for the Furries' all-but-unrivaled longevity. As Cian notes, "It's the same five members in the band, still the same five onstage, still the same five in the studio, and nine albums by the same-five lineup. Which is, I don't know, I'm sure there's — it's not unique, but I'm sure there's not many."

As for going forward, is this reunion a harbinger of things to come — possibly heralding a new album, maybe? Cian's coy on this point, except to say that it might all hinge on the fortunes of the Welsh national soccer team. "We've got a really good chance of qualifying for the Euros next year in France," he says. "And you know, that could see the return of the Furries going back to the studio. Every country has a sort of theme song when they go to these tournaments...Yeah, that might make us go back to the studio."
Posted by Muddy at 12:00 AM