Oogee Wawa and the age of modern medicine in music... 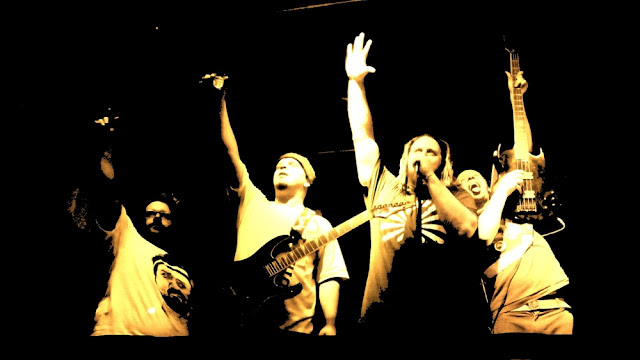 There have been few bands to mix multiple music genres over the past 20 years successfully. This was a ‘thing’ in the 1970’s after the breakout of The Beatles’ drug explorations of 1967. It is argued today that The Beatles may not have been the most original band, copying and inserting influences into their music to call their own, but The Beatles were the most famous band of their time so they were the ones to show the world new movements in pop rock culture. The 70’s brought on bands like Led Zeppelin or Yes, bands that could actually play blues and jazz to a progressive extent, thus forming the genre: progressive rock.

By today’s standards, labels are not so important and the younger generation of musicians can play many styles more instinctively. Over the years, we’ve had bands like Red Hot Chili Peppers, Jane’s Addiction and Radiohead, bands that fuse different styles with ease commercially. The commercial part is the tricky part. How does one self indulge in whatever they want to do when it’s against the public norm and sell tickets to see it? Few bands try... some succeed, some don’t.

Oogee Wawa come from Long Island, New York, a place where everyone’s trying to ‘make it’ at what they want to do. Long Island has reggae bands, funk bands, jazz, rock, hip hop, blues, folk and any other kind of approach you can think of. Oogee Wawa (sounds like a Frank Zappa album title, no?) are mixing all of this into their trademark sound and drawing huge crowds to boot. They are exceptional musicians with ambitious hearts in a growing music scene where everyone’s competing for attention and the better gig. But they seem more focused on having a great time and making feel good tracks more than fame and fortune. Nevertheless, the grab bag of fame and fortune seem to be heading their way. This is how most great bands move ahead, by doing what they do and not trying to copy someone else for superficial purposes.

When listening to their songs, I feel uplifted, like everything’s gonna work out and there’s no reason to stress about things. I get this feeling when I listen to Bob Marley. It works like an herbal supplement for depression. Their music is more than catchy pop tunes with a funky beat. It has a flow to get you through the day and each song has a simple clear message for the listener like “Go Your Way” and “Feelin Alive Today”. This was the essence of reggae pioneers- The Wailers. Poetry for the every man and grooves that put a smile on your face.

Not only have Oogee Wawa tapped into something the majority of New Yorkers seem to like, they are hard working players, performing every week and pumping out new material faster than anyone else as far as I can see. They won first place at the Indie Music Fest in Las Vegas, NV and racked up an impressive amount of shows, over 100 in a year, making them incredibly prolific to say the least. They headlined Long Island’s premiere venue The Paramount and continue to draw big crowds wherever they play.

I love the fact that they combine such eccentric tastes from Eminem to The Beach Boys over beats Lee “Scratch” Perry would flip over. No one else is doing something so fresh and new, it gives a music journalist like myself a rush to the head when I listen. The band has also shared the stage with their predecessors like Slightly Stoopid and Sublime, but I gotta say, I think Oogee Wawa are better! Their jams are even more alive and thousands of people are reacting that way. It’s a party on stage and you’re all invited!

You can experience the Oogee Wawa sensation for yourself by checking their website for tour dates at a venue near you.

Remember what Bob Marley said: “One good thing about music, when it hits you, you feel no pain.” There’s nothing truer in life and Oogee Wawa epitomize the talent to do so.
Posted by Muddy at 12:00 AM