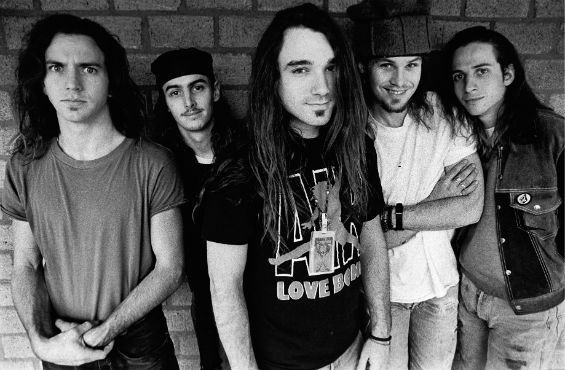 Throughout former Pearl Jam drummer Dave Abbruzzese's numerous, repeated pleas to be invited and included in the band's recent Rock and Roll Hall of Fame ceremony, I sympathized with him. I understood how it must feel to have your contributions to one of the most legendary rock bands alive suddenly be deemed unworthy of inclusion.

After all, Abbruzzese was the band's drummer during arguably their most fertile era, playing on Vs. and Vitalogy following the success of Ten, helmed by original drummer (and recent Hall of Fame inductee) Dave Krusen.

But all of that understanding and sympathy is gone now, at least from me, with his latest rant.

As Alternative Nation uncovered, Abbruzzese is once again chiming in on his exclusion from the Rock Hall induction, claiming that neither the band nor the Hall of Fame formally reached out to invite him (Pearl Jam posted an open letter inviting all past drummers to the ceremony). "That isn't an invite," he wrote. Okay.

For the band to put me in the same light as Matt Chamberlain & Dave K really was a slap in the face. Nothing to do with those guys as people or players. Respect… but as a contributor? A band member? A definitive contributor to the energy and power of where the band went? …the sacrifices, the work, the physical and emotional contributions…not to mention the personal weight of carrying on through and after unceremonious and disrespectful way I was fired.
Putting aside the fact that there are a thousand better ways to handle this (getting mad online doesn't solve anything), it's one thing to want to be included, but to start valuing yourself over some of the other drummers in Pearl Jam's history crosses a line that comes across as petty and small. Nobody got up on stage to diminish Abbruzzese's accomplishments (Hell, Eddie Vedder thanked him in his speech and called him a great drummer) so to try to discredit the contributions of Chamberlain (who referred Pearl Jam to Abbruzzese) and Krusen is a shallow attempt at settling a score that seems to date back to how his firing was handled.

He dives into full-cliche mode, saying he "never played for a paycheck" and "never let the fans down" all the while wondering why he's still a point of contention. That wonder can be answered simply by noting all of the public venom thrown in his direction, of which there was none. Pearl Jam's camp only preached inclusion for all of their drummers.

He closes with the probably passive-aggressive, "I don't know if I heard anyone say it, but you’re welcome and thank you, too."

Abbruzzese found his way into Pearl Jam during their incredible rise, playing on two of their very best records. To see him reunite even for one song on the stage at the Rock Hall would've been a treat for longtime fans but sadly, this case went from something special to something downright petty.

Not true, the band and the hall did not invite or contact me.. The band tweeted that they welcomed the idea of the event granting the possibility of all the drummers to be in the same room. That isnt an invite.

I personally have deep respect for all drummers and of course the five that participated in the pearl jam bands carreer… I am going to say this; For the band to put me in the same light as Matt Chamberlain & Dave K really was a slap in the face. Nothing to do with those guys as people or players. Respect… but as a contributor? A band member? A definitive contributor to the energy and power of where the band went? …the sacrifices, the work, the physical and emotional contributions…not to mention the personal weight of carrying onthrough and after unceremonious and disrespectful way I was fired. I gave this band all I had to give every single moment I was in it. I never played for a paycheck. I never let the band down. I never let the music down. I never let the fans down… not once. I suppose that is why I am still such a point of contention. Truth be told, if I would have been inducted, I would have requested my tech, Jimmy Shoaf Jr. and my daughter, Francesca to say a few words on my behalf. If they had invited me to be there to witness the bands induction? Nope. To do that would justify the mistake and disrespect the core fans that took this band to heart back when all we were to become, we had to earn and also, most importantly, we had to prove we deserved every single time we took the stage. And we did that. We, the Pearl Jam band & original crew, deserved to be inducted & respected. I’m proud of my old friends for managing it all so well. I dont know if I heard anyone say it, but you’re welcome and thank you, too

Time to STFU Dave! The fans are sick of you and it's obvious now as to why you were fired from the band.
Posted by Muddy at 5:16 PM