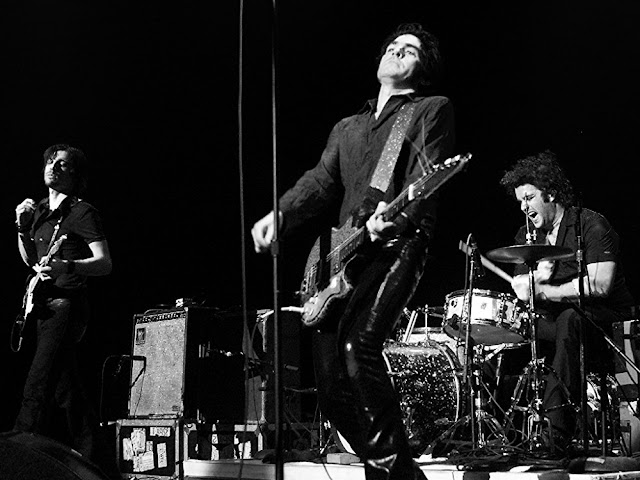 Legendary garage rocker Jon Spencer unveiled a gritty new track, "Do the Trash Can," the first offering off his debut solo album, Spencer Sings the Hits!, set to arrive early this fall via In the Red Records.

From Pussy Galore to 'Freedom Tower,' the combustible blues-punker looks back

On "Do the Trash Can," Spencer puts classic rock and roll dance tunes through a madman's rock grinder. Buzzsaw guitar riffs groove alongside a metallic clatter of percussion, while Spencer lets loose with a wild vocal performance.

Spencer has enjoyed a long career with an array of bands, most notably fronting the Blues Explosion, while also playing with Pussy Galore, Boss Hog and Heavy Trash. For his first solo record, Spencer embraced a DIY approach and partnered with Quasi frontman Sam Coomes and drummer M. Sord.

"Sam is someone with whom I have crossed paths many times over the years, I have always been a fan of his wild keyboard style and twisted tunesmith-ery," Spencer said. "In fact we kicked around the idea of a collaboration way back in the early Aughts. I got to know Sord from many projects done at the Key Club (Andre Williams, JSBX, & Boss Hog), he was the handyman and assistant engineer that turned out to be a great drummer."

Spencer, Coomes and Sord cut Spencer Sings the Hits! with producer Bill Skibbe at his Key Club Recording Company in Benton Harbor, Michigan. However, the group's session was cut short after three days due to the sudden death of Spencer's father-in-law. After spending time with family, Spencer returned to Key Club to finish overdubs and mixes on his own. The record will feature percussion with a metallic edge, a nod, Spencer said, to his past with Pussy Galore.

"Nothing like digging the gas tank from an old Chevy out of a Michigan junkyard snow bank in January," Spencer recalled. "Junkyard owner kept asking me if the metal was for a school project, but as a bluegrass player he could understand the possible use for a recording session."

Prior to releasing Spencer Sings the Hits!, Spencer will embark on a North American tour this summer. The trek kicks off July 29th at First Avenue in Minneapolis, Minnesota and wraps August 11th at Ottawa Tavern in Toledo, Ohio. The Melvins are set to join Spencer during the early stages of the tour.