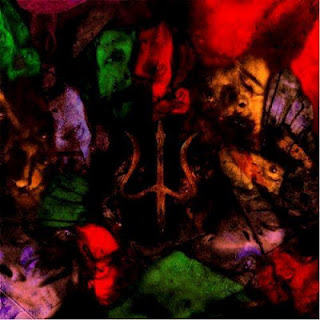 I read somewhere that this band sounded like the evil-stooges, so I immediately had to check it out. I grew up on Iggy Pop and The Stooges, and also bands that sound like them, be it Mudhoney or The Birthday Party. At times, Aqua Nebular Oscillator sound like all the different phases of The Stooges. The innocent young punk-ism of the self-titled 1st record, the free form noise sections and the funk of Funhouse, and at times identical to the blown-out hard rock sound of Raw Power.

The opening track: “Riot” does sound like an 'evil stooges', but the record shows a diversity greater than any one band, ranging from influences such as Hawkwind to Serge Gainsbourg to The Soft Machine. At times, I get lost in the music and forget who I’m listening to. I thought I actually was listening to a Serge Gainsbourg song in the midst of an iPod shuffle. But Aqua Nebular Oscillator is heavy.  Lead singer and mastermind behind the band: David Sphaèr'os has the sinister snarl of Gainsbourg on some songs, particularly- “Dead Soul”. He has one of those voices, where you can’t tell if it’s through effects or not. When the band improvises, they sound like a kraut-rock MC5, with dueling guitar leads and backwards sound effects.  “Lucifer” is probably the heaviest track from start to finish. Trashy, filthy garage punk. For the most part, the album is psychedelic-garage rock, and garage rock never felt this good! “Black Sun” is one of my favorites, back to fast old school punk, more like John Cale singing for The Dead Boys. It’s produced like a band raw and live in a studio. “Incandescence” is an epic closing track, brilliant slide guitars slink around a descending guitar pattern over an acid-house drum groove as chanting words repeat hypnotically. Sometimes, there’s a cartoonic vibe to the rhythm section, like a soundtrack for a Twilight Zone episode, but it always comes back to high energy rock.

Parisian garage rock, psyche, it doesn't matter what it's labeled. Their music transcends any kind of categorization from song to song. They just let the music go where it wants, naturally. Aqua Nebular Oscillator is a very unique band, and Third, their latest, is as cool as it gets.